At the height of its post deregulation, Harding Lawrence led, expansion in the fall of 1979 Braniff International Airways was operating no fewer than 11 Boeing 747's on an expansive international route network that spanned both the Atlantic and Pacific oceans.  The company's fleet was made up of 4x 747-100's, 4x 747-200's and 3x 747SP's and operated out of three primary bases in Los Angeles (KLAX), Dallas/Fort Worth (KDFW) and Boston (KBOS).  But of the eleven airframes you may be surprised to learn that only six were owned outright by the company with the remaining five aircraft being leased from various different airlines.

But before the deregulation expansion madness which would eventually spell the death of the company Braniff began it's Boeing 747's operations with a single aircraft.  N601BN, nicknamed "The Great Pumpkin", "Big Orange," or "Fat Albert" due to its bright orange paint scheme which covered the giant aircraft from nose to tail, was the 100th 747 to roll of the Everett line and was delivered new to the company on December 28, 1970.

Braniff wanted to make a splash with its new aircraft, and so the company spared no expense appointing the airplane with the finest leathers and interior furnishings.  The cavernous cabin was divided it into five distinct rooms, with each room having a different color and its own dedicated passenger lounge.  The new airplane with its opulent furnishings and first class service was branded as 747 Braniff Place, "The Most Exclusive Address in the Sky."

During the first two weeks in January the company sent the N601BN on a publicity tour covering 17 cities.  These flights were meet with great public interest with one particular stop in Memphis attracting 10,000 people to the airport just to see "The Great Pumpkin."  Flight crews used these flights to build time on the aircraft and iron out the bugs and fine tune cabin service.  Finally, N601BN was ready for line service and on January 14, 1971 the aircraft operated is first revenue flight, BN501, the companies flagship Dallas-Honolulu (PHNL) route, replacing the 707-300C which had flown the flight since its inception in August of 1969.

For the next seven years and one month this remarkable aircraft soldiered on as the companies lone 747 operating the companies daily Dallas to Honolulu flight on a breakneck schedule departing Dallas, at 12:45 p.m. as BN501, and flying 3,784 miles to Honolulu arriving at 4:52 p.m. local time.  The aircraft was on the ground in Honolulu for only 2 hours and 23 minutes before departing as BN502 at 7:15 p.m. and flying 3,784 miles back to Dallas arriving at 6:08 a.m. the next day.  Due to this insane schedule N601BN on average achieved a daily utilization rate of 15.5 hours which was a record for the type for many years.

In the short 6 hours and 37 minutes that the aircraft was on the ground in Dallas mechanics had to perform all required routine maintenance to ensure the aircraft was in good mechanical condition and ready to operate the next flight to Honolulu.  In order to ensure an extremely high dispatch reliability rate for its solitary 747 fleet Braniff adapted a progressive maintenance system, modeled after Continental Airlines which pioneered the concept in order to squeeze as much flying time out of its relatively small Boeing 707 fleet.  Under this system Braniff performed preventative maintenance, babying the airplane and going well above and beyond routine maintenance schedules to ensure that N601BN could be dispatched on time, every day.  On those rare occasions when the aircraft couldn't be dispatched from Dallas because of a technical problem the airline kept several 707-300C's in reserve to cover the 322 seat capacity of its single 747.

On February 28, 1978 Braniff inaugurated Dallas-London Gatwick (EGKK) service from its dedicated Terminal 2W at the relatively new DFW Hub which had opened just four years earlier.  N601BN was still the only 747 on the property an as such it was needed for the new London route meaning the Honolulu route had to be temporarily downgraded to a DC-8 until a second 747 was acquired.  Finally in March Braniff leased a second 747-100, registered N9666, from American Airlines which joined N601BN and effectively doubled the size of Braniff's 747 fleet.  N9666 was never painted in full Braniff colors and retained its bare metal American paint scheme with the addition of Braniff titles and a big orange cheat line down the side of the fuselage.  With the arrival of the second 747, N601BN returned to the Dallas-Honolulu route and N9666 took over the London duties. 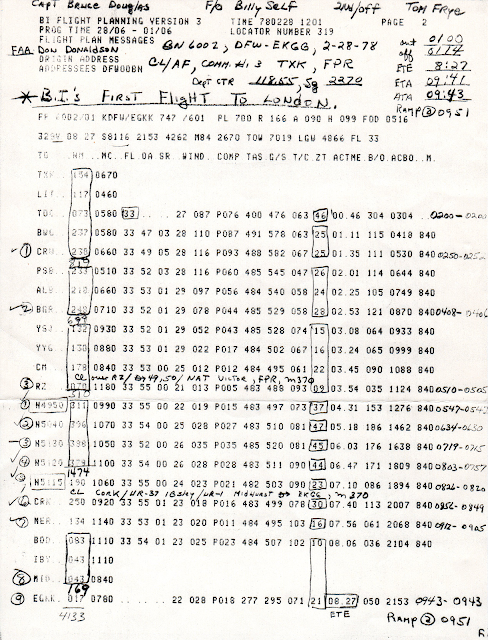 In October of 1978 Braniff leased a second 747-100 from American, registered N9667, this aircraft also received the same hybrid paint scheme as its sister N9666.  The third 747 was brought online to handle the newly awarded DFW-SEA-PDX-HNL route which was initiated on November 1, 1978.

The next aircraft, registered N610BN, the companies fourth 747-100 an ex Lufthansa aircraft arrived the following month in November. The fifth aircraft, registered N620BN, a 747-200B leased from Canadian Pacific entered the property a week later.  Both N610BN and N620BN received a revised orange paint color with the new Ultra Livery which was introduced by the company the previous year.  The aircraft were quickly deployed onto Braniff's growing international route network.

With the passage of the Airline Deregulation Act on October 18, 1978 Harding Lawrence convinced that airline deregulation would not last launched a bold and ambitious expansion plan which would see Braniff double in size within a year and set in motion events which would lead to the extinction of the airline four short years later.  So it was one week later on October 25, 1978 that Braniff overwhelmed the soon to be defunct Civil Aeronautics Board with filings for 626 of the 1,300 routes available.  The CAB eventually awarded the carrier 32 routes from 16 new cities and gave Braniff 45 days to start the new routes.

Early in 1979 the carrier in response to Pan American's plan to abandon Boston-Europe services, seized on the opportunity to build a trans-Atlantic base in Boston.  Braniff applied for and was granted route authorities to serve Amsterdam (EHAM), Brussels (EBBR), Frankfurt (EDDF) and Paris de Gaulle (LFPG) from Logan.  In addition the airline received authority to serve these same markets nonstop from its DFW hub.  To support these new routes Braniff leased three addition 747-200's, bringing the fleet total to 8 aircraft split evenly with four 747-100's and four 747-200's.  The Sixth 747, registered N749WA, a 747-200C leased from World Airways came online in April of 1979.  The seventh aircraft, registered N602BN, a 747-200B leased from People Express arrived later the same month.  The eighth 747, registered N611BN, also an ex Lufthansa airframe, entered the property the following month.  All three of the newly acquired aircraft, N749WA, N602BN and N611BN received the full Ultra Orange paint scheme.  By June of 1979 the carrier was operating a fleet of eight 747's to Europe and Hawaii from hubs in Boston and Dallas.

The last phase of international expansion occurred in the summer of 1979 with Braniff opening up a new trans-Pacific 747 base at LAX.  Braniff's Pacific services began on May 4, 1979 when the company was issued temporary route authority on the LAX-HNL route due to a pilot's strike at United which temporarily grounded the airline.  On July 3, 1979 the airline added its second destination from LAX when it launched direct service from Los Angeles to Hong Kong (VHHH) via Guam (PGUM).  This was followed quickly by the launch of  nonstop service to Santiago, Chile (SCEL) on August 1 and Seoul, South Korea (RKSS) on September 15.  With the delivery of the first new 747SP, registered N603BN, the company extended its Seoul service to Singapore (WSSS), officially launching the new service on October 31, 1979.  The 747SP was originally ordered to serve a proposed ultra long haul Dallas-Houston-Dubai (OMDB) oil flight which never materialized.  LAX served as the home for the airline's 747SP fleet which at its peak numbered three aircraft, all receiving the full Ultra Orange scheme. 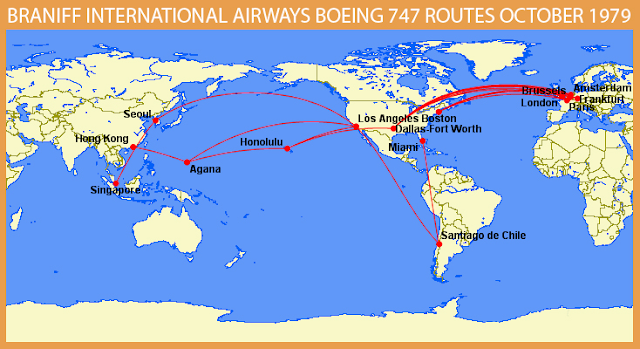 The last two 747SP's were brought into line service the following year with N604BN arriving in April of 1980 and its sister N606BN arriving a month later in May.  By the close of spring of 1980 Braniff's international expansion reach its zenith, with the airline operating eleven Boeing 747's on a far flung route network that spanned two oceans and three continents.  Harding Lawrence had greater ambitions though evident by the carrier's pending route applications which would see the airline land in Australia, Thailand, and India.  Together with the pending Dallas-Bahrain (OBBI) application Braniff would complete its world spanning route network by tying east and west together thus becoming a truly global airline.  But the pace of the airline's domestic and international expansion and the vast amounts of capital it required were ultimately unsustainable and the airline started to hemorrhage money.  For the year ending 1979 Braniff reported its first ever loss under Harding Lawrence sliding from an $80,159,000 profit in 1978 to a $38,438,00 loss in 1979.

Less than a year later in the face of mounting debt and losses in the Pacific of neary $1 million a week Braniff shuttered the Singapore route on May 15.  By July 1 the Pacific operation had been reduced to a shadow of its former self with only the Hong Kong and Seoul flights operating on a greatly reduced schedule.  The second 747SP, N604BN, barely five months old was the first Braniff owned 747 to leave the property being sold to Aerolineas Argentinas in September to raise much needed cash.  Next to go were the continental European routes from Boston, which were below break even and loosing money.  The carrier then moved on to its DFW hub cutting the unprofitable nonstop European flights to Amsterdam, Frankfurt, Brussels and Paris.  Only the London flight remained with service to Brussels and Frankfurt being served as an add-on service from London.  By October 1, Braniff suspended the remaining trans-Pacific flights out of LAX and closed the crew base there.  By the close of 1980, a slowing economy and resulting poor load factors combined with an air traffic controller's strike, huge debt incurred from the massive expansion and poor management led to a loss of $107,493,000.

The company faired no better in 1981 posting a staggering third consecutive yearly loss of $94,800,000.  By this time the company's financial state was such that employees and customers alike feared the airline might go out of business any day.  Less than a year later the public's fears were realized when on May 12, 1982 the once proud airline reached the ends of its road.  Ironically, N601BN the first 747 delivered to Braniff back in 1971 operated the companies last flight BN501-502, the daily Honolulu flight which had made the airline famous.  The aircraft had operated one of the few regularly scheduled flights to depart from DFW on May 12 and it returned the following morning to a virtual ghost town, with terminal 2W devoid of any human activity and Braniff jets littering the tarmac as far as the eye could see.  The landing of N601BN from Honolulu on that dreary day in May marked the close to the life of one of the most vibrant airlines in U.S. history and the final chapter to its Boeing 747 story. 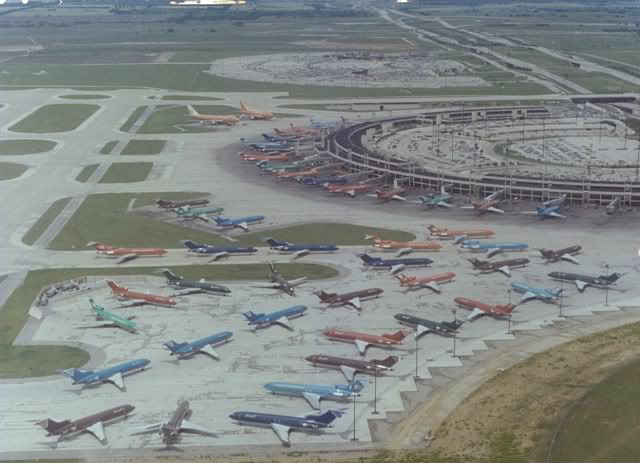